click to enlarge: Preparation, isolation and detection procedure to detect viral DNA in an AbMV-GFP infected cell or nucleus, respectively. (A-C) preparation by peeling the epidermal layer of the lower surface of N. benthamiana leaf and transfer to a MMi MembraneSlide. (D-M) isolation of either a single epidermal cell (D, F, H, J, L), which expressed GFP, or a single nucleus (E, G, I, K, M), respectively, by the MMi CellCut system, where the sample is collected in MMi IsolationCaps. (modified figure 1 from Sicking and Krenz, 2022). 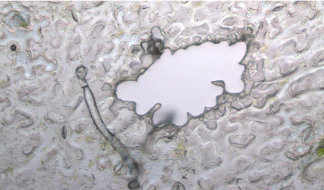 isolation of either a single epidermal cell, which expressed GFP; extract from the figure above

Laser dissection microscopy (LDM) is a method for obtaining specific tissues, cells, or even organelles under direct microscopic observation to enrich histologically nearly pure cell populations. In the recent publication, a method for amplifying viral circular DNA from single nuclei or cells by rolling circle amplification (RCA) is presented to show and proof infection of the selected and collected nucleus, nuclei or cell(s), respectively. For this purpose, our group used a MMi Cellcut microdissection system. In addition, proof of principle was provided that quantification of viral DNA molecules in a single plant nucleus is possible. Furthermore, a method is described to isolated non-fixed epidermal tissue from Nicotiana benthamiana plants/leaves and Arabidopsis thaliana by peeling suitable for the preparation of samples for LDM.
In the future, the results will enable quantitative analyses at the single cell level as well as evolutionary analyses, e.g. to determine quasi-viral species in a single cell. Of particular note is that the combination of RCA or PCR analyses of LDM-based dissected organelles is not limited to a plant pathogen/host system and can be transferred to other systems.