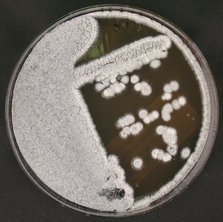 Actinomycetes are the most important source for antibiotics as they account for up to two-thirds of all antibiotics in clinical use today. Based on their genetic setup, these microorganisms can produce many more anti-infectives, but with the current lab methods the production of these "hidden" antibiotic treasures is not activated. Some tools to force such activation exist, but a widely applicable, easy and general method to force the actinomycetes to reveal their secret armory against competitors and infection is missing. With SARPact such a central tool will be provided.

SARP regulators are very abundant in actinomycetes, where they act as direct activators of biosynthetic gene clusters, encoding different types of antibiotics. In the project SARPact a large-scale targeted process for the activation of silent biosynthetic gene clusters by using SARP-type regulators will be established. This will involve genome mining and genetic engineering of sequenced actinomycetes from the DSMZ strain collection for SARP-guided cluster activation. Engineered strains will be analyzed for novel natural compounds with antimicrobial properties, of which lead substances will be isolated, structurally elucidated and profiled. Concomitantly, the molecular mechanistic principle of the SARPs will be investigated, which will allow for a knowledge-based optimization of the activator. SARPact builds upon the complementary expertise of three academic and one industrial partner, covering the fields of genetic engineering, genome mining, protein structural biology, natural product chemistry, and bioactivity screenings.