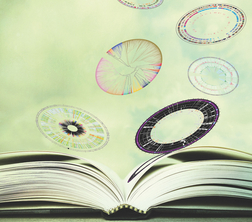 The latest addition to the JGI’s Genomic Encyclopedia of Bacteria and Archaea (GEBA) compendium focuses on Actinomycetes. (Zosia Rostomian/Berkeley Lab) 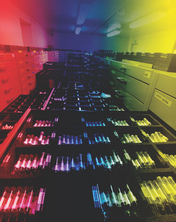 Type strains in ampules such as these were used to generate reference microbial genomes. (Courtesy of the DSMZ)

The planet’s microbial diversity is immense, yet much of it remains unknown. For more than a decade, researchers around the world have collaborated with the U.S. Department of Energy (DOE) Joint Genome Institute (JGI), a DOE Office of Science User Facility located at Lawrence Berkeley National Laboratory (Berkeley Lab), to fill in these gaps of knowledge.
In a study published November 11, 2022, in Cell Genomics (10.1016/j.xgen.2022.100213), the team focused on Actinobacteria (Actinomycetota), a group of bacteria with diverse metabolic activities. Found in marine and terrestrial environments, actinobacteria play roles in both the carbon and nitrogen cycles, break down plant mass (think biofuels), enhance plant health, cause diseases, and produce antibiotics. Still, the team estimates that genomic information is only available for a fraction of extant actinobacterial diversity.
The article adds to the compendium generated as part of Genomic Encyclopedia of Bacteria and Archaea (GEBA) initiative. “This project has helped to define the current shape of the microbial tree of life by filling in genomic information for thousands of branches,” said Natalia Ivanova, senior author of the study and head of the JGI’s Microbiome Annotation Group. Many of these bacterial and archaeal genome sequences have been generated using techniques that the JGI has pioneered, including single-cell genomics and metagenomics. The GEBA initiative has also utilized a very large collection of type-strain isolates, provided by the Leibniz Institute DSMZ – German Collection of Microorganisms and Cell Cultures GmbH, based in Braunschweig, Germany.

The BGC Repertoire in Actinobacteria
Over the years more than 3,400 genomes have been sequenced from curated DSMZ isolates, for which quality DNA has been provided by the team. These strains have been characterized physiologically and enzymatically, with descriptions of how their activities influence biochemical reactions. For this article alone, more than 600 genomes (dubbed “GEBA-Actino”) were sequenced from DSMZ type-strain deposits. All of these genome sequences and the tools to compare them are available on the JGI’s Integrated Microbial Genomes & Microbiomes (IMG/M) portal.
As part of a comparative analysis, 824 new GEBA-Actino genome sequences were combined with nearly 5,000 publicly available ones and 1,100 metagenome-assembled genomes (MAGs) reconstructed from sequenced environmental samples in a previous study. The team analyzed over 80,000 biosynthetic gene clusters (BGCs) for synthesis of secondary metabolites, in line with the JGI’s strategic initiatives. These specialized compounds enable organisms to respond to environmental stresses or mediate interactions with each other (sometimes antagonistic ones, via antimicrobials) – and could have applications in many fields. The team discovered that rampant horizontal gene transfer and frequent gene loss shape the BGC repertoire in most genomes. The BGC data is also contained within the JGI’s Secondary Metabolism Collaboratory (SMC) portal (smc.jgi.lbl.gov).

Unique Value of Isolate Genomes
One repeated assertion in the study is the unique value of isolate genomes in contrast to genomes from uncultured taxa. Piecing together MAGs from environmental sequence fragments can lead to high-quality yet incomplete genome sequences which could bias the analyses. MAGs could also represent composites of populations where individual strains are collapsed, while these issues are not commonly seen with reference isolates.
“For secondary metabolite discovery in particular, this is a cautionary tale on their limitations; the need for high-quality isolate genomes is clear cut,” said Rekha Seshadri, lead author of the study. “And even if one is agnostic to Actinobacteria, we hope the analysis of the sample origins of novel lineages elicits interest in cultivation efforts targeting understudied environmental samples. Even traditional cultivation approaches applied to relatively tractable samples like lakes and rivers could help fill in the gaps,” she added.
DSMZ not only preserves a standardized culture collection of international renown, from which a researcher can easily procure a culture for follow up work, but also maintains various bioinformatic tools and comprehensive curated databases, including nomenclatural and genomic information as well as of important descriptive metadata about each strain. “This has been a very fruitful collaboration between JGI and DSMZ overall, resulting not only in a valuable sequence resource to complement DSMZ’s vast strain resource, but also yielding and supporting many high-impact publications,” emphasized Markus Göker, who managed the production of genomic DNA at DSMZ for GEBA-Actino and similar projects.

About the Joint Genome Institute
The U.S. Department of Energy Joint Genome Institute, a DOE Office of Science User Facility at Lawrence Berkeley National Laboratory, is committed to advancing genomics in support of DOE missions related to clean energy generation and environmental characterization and cleanup. JGI provides integrated high-throughput sequencing and computational analysis that enable systems-based scientific approaches to these challenges. DOE’s Office of Science is the largest supporter of basic research in the physical sciences in the United States, and is working to address some of the most pressing challenges of our time. For more information, please visit science.energy.gov