Bacteria use task division when breaking down plastic 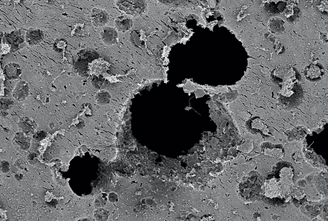 A current study by Dr. Başak Öztürk and her team at the Leibniz Institute DSMZ-German Collection of Microorganisms and Cell Cultures GmbH in Braunschweig, Germany, investigated how marine organisms break down and utilise biologically degradable plastic. The researchers not only established the bacterial groups involved in the breakdown, but were also able to uncover a potential mechanism behind the degradation of the plastic material. The team recently published their findings in the internationally renowned journal Nature Communications (https://www.nature.com/articles/s41467-020-19583-2).

Plastic: an environmental issue
Demand for plastic has increased continuously over the last few years. For instance, in 2017 350 million tons of plastic were produced worldwide, more than 70 percent of which resurfaced as waste in the oceans. The industry has reacted to this increasing pollution of the environment by developing biologically degradable plastics. One frequently utilised material is poly(butylene adipate-co-terephthalate) (PBAT), which offers both the necessary mechanical properties as well as a good biologic degradability. PBAT is often used in packaging materials, bin bags and even in agriculture, for instance in mulch films, as its properties are very similar to those of the conventional plastic polyethylene (LD-PE). The breakdown of PBAT by microorganisms in the soil has already been extensively researched. However, it is still unclear how the breakdown occurs in an aquatic environment, and whether for instance marine bacteria would be able to use the degradation products as a food source.

Different bacteria cooperate when breaking down plastics
In their study, the research team was able to show that different bacteria from the groups Alphaproteobacteria, Gammaproteobacteria, Flavobacteria and Actinobacteria are involved in the degradation of PBAT. “Our first experiments demonstrated that a biofilm is formed on the plastic within the first three days; the first holes were apparent after six days”, reports Dr. Ingrid Meyer Cifuentes, postdoc researcher at the DSMZ and lead author of the publication. In total, it took the bacterial community 15 to 20 days to fully disintegrate the plastic material. During this time, the various bacteria used the metabolic PBAT products as carbon source for their own metabolism. The bacteria ultimately converted approximately 60 percent of the available plastic carbon into CO2.
Further experimental findings led the authors to conclude that the initial degradation of the plastic takes place within the biofilm. The resulting metabolic products are then further broken down by both the bacterial community of the biofilm as well as free-floating bacteria in the immediate surroundings. Thus, the degradation of the plastic is a synergistic feat. “The degradation process we investigated in the lab is probably a bit different to that in the ocean”, remarks microbiologist and study leader Başak Öztürk. “However, our findings clearly indicate that the degradation of plastic in a marine environment is similar to that observed in soil. In the long run, this knowledge could help science develop plastic with an even better organic degradability, and thereby make a significant contribution to the protection of the environment.”

Independent Junior Research Group “Microbial Biotechnology”
Dr. Öztürk has headed the Independent Junior Research Group “Microbial Biotechnology” at the Leibniz-Institute DSMZ since 2018. The group focuses on three main subjects: the investigation of the degradation, continuance and behaviour of biodegradable plastics in the marine ecosystem, the research of new microorganisms capable of breaking down groundwater-polluting pesticides and xenobiotics in the micromolar range, and the structural explanation of enzymes involved in these degradation processes.