Breaking down herbicides in agriculture: farmers can easily pitch in 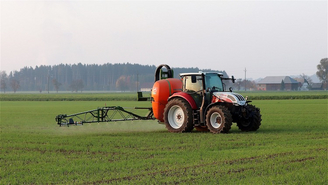 Microbiologist Dr. Başak Öztürk of the Leibniz-Institute DSMZ-German Collection of Microorganisms and Cell Cultures in Braunschweig, Germany, identified at the time of her research stay at the Belgian Katholieke Universiteit Leuven together with her colleagues (headed by Prof. Dr. Dirk Springael) bacteria that break down the herbicide linuron. The scientists confirmed for the first time the role of Ramlibacter bacteria in the degradation of this plant protection agent in an on-farm purification system, and demonstrated the direct link between certain microorganisms and herbicide degradation. The results were recently published in the internationally renowned journal Environmental Science & Technology (DOI: 10.1021/acs.est.0c02124).

Linuron breakdown in agriculture
Linuron is a selective herbicide that targets weeds by inhibiting photosynthesis. The EU banned the agent in 2018 due to its carcinogenic properties, but it is still used in some countries including the United States and Canada. To minimize the contamination of the ground water, many agricultural businesses in these countries have installed systems for water purification. These so-called ‘on-farm bio-purification systems’ (BPS) filter waste water collected during the cleaning process of farming equipment. The exact effect mechanism of these purification systems is not yet fully understood; what is known is that different bacteria are able to degrade the herbicides in the water.

Three proteobacteria involved in BPS linuron breakdown
Scientists have long aimed to establish what kind of bacteria exactly are involved in the herbicide degradation. In the present study, Dr. Başak Öztürk and colleagues were able to show the involvement of bacteria of the genus Variovorax, Comamonadaceae and Ramlibacter in the breakdown of linuron. The latter were detected in a BPS-matrix for the first time ever. “The unique feature of our study is that we were able to show the direct link between herbicide breakdown and microorganisms responsible for this breakdown. Our experiments also established that in-situ, other microorganisms are responsible for the degradation of pollutants than previously thought from laboratory investigations”, summarizes Başak Öztürk. “Hopefully, clarifying the effect mechanism of these on-farm purification systems will now also convince German farmers of the usefulness of having their own little wastewater treatment plants. Setting up a BPS is neither cost intensive nor does it require a lot of space. And even if we do not employ linuron here in Germany, we do use other herbicides that may have a negative impact on the eco system.” Since 2018 Dr. Öztürk heads the Independent Junior Research Group „Microbial Biotechnology” at the Leibniz-Institute DSMZ, which focuses on the biodegradation of chemical compounds such as plant protection agents or plastics.