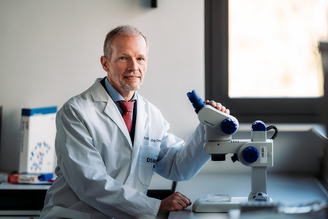 Following the conclusion of negotiations by the Parties to the Convention on Biological Diversity (CBD) on a follow-up agreement (Post-2020 Global Biodiversity Framework) at the Conference of the Parties (COP15) in Montreal, the Scientific Director of the Leibniz Institute DSMZ-German Culture Collection of Microorganisms and Cell Cultures GmbH Prof. Dr. Jörg Overmann issues a statement. The microbiologist was a delegation member of the German Research Foundation (DFG) at COP15 in Montreal, Canada, from 6 to 14 December. Statement Prof. Dr. Jörg Overmann:

As is to be expected with international agreements, the framework agreement leaves some room for interpretation. This is because the actual form of implementation will be determined by each country itself. To this end, the Parties have agreed to revise and update their so-called National Biodiversity and Action Plans, if possible, by the next COP16 in two years' time. For the monitoring of implementation, the conference documents provided the Parties with a list of possible metrics to be adapted individually. The first reports by the Parties on implementation are then planned for the years 2026 and 2029. Many of the agreements thus remain at the procedural level. The need for technical and scientific cooperation to effectively support low-income countries in the effective implementation of the global biodiversity framework agreement is emphasised. This is certainly purposeful. However, how effectively and how quickly the ongoing species loss can actually be halted will depend on the concrete implementation measures at the national and local levels and on the acceptance of the population. This also reminds us in Germany that nature conservation and species protection are at least as much about new, challenging measures in our own country as they are about measures such as those in the Amazon rainforest.

According to the final document, the extraction, accessibility and use of digital sequence information are relevant for research, innovation, sustainable development. The value of access to data in public databases is explicitly recognised and the uploading of further sequence data to these databases is explicitly advocated. According to the framework agreement, the availability, extraction, analysis and functioning exchange of digital sequence information is an important element of capacity building in the Global South. In addition, a multilateral mechanism for financial benefit-sharing in the use of digital sequence information is seen as an important source of funding for the trust fund. In the next two years, a multilateral mechanism for benefit-sharing will therefore first be designed in more detail by an international working group, analysed by accompanying studies and then recommended to COP16. In this way, the previously discussed massive restrictions on the free exchange of data could be averted for the time being. Such restrictions would have called into question the recording and research of biodiversity and thus its protection, de facto thwarting the agreement.

In my view, the participation of the scientific community during the negotiations in Montreal was essential and also quite successful. Overall, it can be said that academic research and science became visible for the first time as an independent body and that the scientific arguments on digital sequence information could be effectively fed into the negotiation process. It can be assumed that science must and will now also provide important facts and arguments for the implementation of the new framework agreement in the coming years."

The Leibniz Association
The Leibniz Association connects 97 independent research institutions that range in focus from the natural, engineering and environmental sciences via economics, spatial and social sciences to the humanities. Leibniz Institutes address issues of social, economic and ecological relevance. They conduct knowledge-driven and applied basic research, maintain scientific infrastructure and provide research-based services. The Leibniz Association identifies focus areas for knowledge transfer to policy-makers, academia, business and the public. Leibniz institutions collaborate intensively with universities – including in the form of “Leibniz ScienceCampi” – as well as with industry and other partners at home and abroad. They are subject to a transparent, independent evaluation. Because of their importance for the country as a whole, the Leibniz Association Institutes are funded jointly by Germany’s central and regional governments. The Leibniz Institutes employ around 20,500 people, including 11,500 researchers. The financial volume amounts to 2 billion euros. www.leibniz-gemeinschaft.de