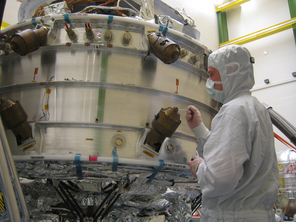 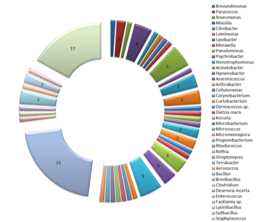 Bacteria are ubiquitous and some of them are real survival specialists – a property, which is particularly challenging for space missions. The spacecraft that are sent on their long journey into space should be as clean as possible and considerably reduced in microbial burden, since the risk of biological contamination of other planets is high. Such a contamination could affect the detection of extraterrestrial life or make it even impossible. For this reason, spacecraft are assembled in so-called "clean rooms" under the most stringent controls for bio-contamination. Nevertheless, microorganisms exist that can deal with the prevailing extreme conditions such as dryness, lack of nutrients or presence of disinfectants. Space agencies have defined standards by which to measure the bioburden and diversity of microbial species in the clean rooms and on the spacecraft. The DSMZ now offers, in cooperation with the European Space Agency (ESA), the first public collection of extremotolerant bacterial strains adapted to the harsh conditions within the clean rooms. This collection is an important resource for research institutes and industry to investigate adaptive mechanisms of bacteria (for instance, resistance to heat, UV radiation, ionizing radiation, desiccation, disinfectants). The journal "Astrobiology" reports about this culture collection in its current issue.

"For any space mission an upper limit of bioburden is defined,” says Dr. Rüdiger Pukall, a microbiologist at DSMZ. "Bioburden measurements are a crucial part of Planetary Protection requirements”. This concept includes all activities that prevent contamination of planets and other celestial bodies by terrestrial forms of life, such as microorganisms, in the context of inter-planetary space missions. It is of particular importance to evaluate the biodiversity of microbial communities on spaceflight hardware and in associated assembly facilities. The objective in doing so is to develop appropriate decontamination strategies to avoid microbial hitchhikers during the next mission to Mars."

Selected surface areas within European spacecraft associated clean rooms as well as the surface of the Herschel Space Observatory located therein were sampled between 2007 until 2009 by microbiologists from the Leibniz-Institute DSMZ, the German Aerospace Center (DLR) and the University Regensburg. The Herschel Space Observatory was constructed at various locations around the globe: clean rooms in Friedrichshafen (Germany), Noordwijk (Netherlands), and at Europe’s spaceport in Kourou (French Guiana).
„A clean room is a particularly extreme habitat for microbial survivalists", explains Rüdiger Pukall. "The nutrient-poor environment, controlled moisture and temperature, air filtering and frequent decontamination of surfaces create a special habitat for spore-forming, autotrophic, multi-resistant, facultatively or obligate anaerobic bacteria."
Even taking a sample of the bacteria in the clean rooms is a special challenge for the researchers. "In order not to introduce any foreign microorganisms or particles, the microbiologists have to wear protective suits and face masks ", reports Rüdiger Pukall. “Here the samples were taken with special swabs and wipes, according to defined standard procedures from ESA. The samples were subsequently analysed at the University Regensburg and the DLR in Köln and the bacteria were isolated using diverse cultivation strategies."
Then Dr. Rüdiger Pukall's team at DSMZ in Braunschweig identified the bacterial strains by 16S rRNA gene sequence analysis. For long term storage, the bacteria were freeze-dried and stored in liquid nitrogen. Bacteria that could not be cultivated were also identified via sequencing after extraction of the total genomic DNA from the samples.


A collection of "survivalists"
The core of this special collection consists of about 300 bacterial strains that were isolated from various clean rooms. All bacteria belong to Risk group 1 or 2. A large portion of the isolates can be assigned to the Gram-positive bacteria, whereby spore-forming bacteria from the species Bacillus as well as Micrococcus- and Staphylococcus-species are represented. Gram-negative bacteria are predominantly represented by the species Acinetobacter, Pseudomonas and Stenotrophomonas.
Recently, an additional set of 60 isolates affiliated to these genera were added to the ESA collection. The isolates derived from samples taken in 2003 and 2004 within an ESA founded project in cooperation of DLR and DSMZ during preparation of the missions SMART-1 (interplanetary satellite, lunar mission) and ROSETTA (exploration of comets) in Noordwijk and Kourou. Five clean room isolates were provided by the NASA Jet Propulsion Laboratory (USA) in addition.
About 30 per cent of the microbes within the ESA collection are still unknown and have now been made available for research purposes. Some of these isolates have been described recently as a novel species, such as Paenibacillus purispatii (DSM 22991) or Tersicoccus phoenicis (KO_PS43, DSM 30849), a representative of a new bacterial genus.

Significance of the ESA collection
The collection of extremotolerant microbes which are adapted to the artificial biotope of the clean rooms offers an extraordinary valuable and beneficial source for industry and research. For ESA, the culture collection is an essential tool to understand the biological contamination and its potential risk and to evaluate novel biological decontamination procedures and disinfection strategies. The collection will be expanded within the next three years by including more extremotolerant bacteria that could be of interest for industry and research.

Link to the collection:
www.dsmz.de/catalogues/catalogue-microorganisms/specific-catalogues/esa-strains.html

Background:
Planetary protection is the term that describes the aim of protecting solar system bodies from contamination by terrestrial life, and protecting Earth from possible life forms that may be returned from other solar system bodies. Regulations are based on obligations identified in the United Nations Treaty on Principles Governing the Activities of States in the Exploration and Use of Outer Space, including the Moon and other Celestial Bodies, and advice provided by the Committee on Space Research (COSPAR).