Dr. Dieter Claus, former Director of DSMZ, Braunschweig, Germany, has passed away in the night of 15th to 16th of April 2014 after a long and severe illness. 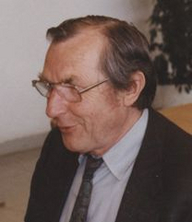 This is the sad news that Dr. Dieter Claus, former Director of DSMZ, Braunschweig, Germany, has passed away in the night of 15th to 16th of April 2014 after a long and severe illness.

Dieter Claus had been the head of the nucleus of today's DSMZ, the SMG-Sammlung von Mikroorganismen Göttingen (founded 1969), which under his guidance turned into the DSM-Deutsche Sammlung von Mikroorganismen, and, after moving to Braunschweig, was enlarged into the present DSMZ. He acted as DSMZ's first Director until his retirement in 1991. His far-sightedness made him develop the university in-house collection into an internationally acting scientific service collection. He drove the development of a loose network of collections to the final efficiently working and worldwide renowned centralized institution that it is today.

From the very beginning, he had been involved in international cooperation such as the development of the WFCC-World Federation for Culture Collections, which held its first International Congress in 1969 in Japan. He was elected as President for this organization in the years 1981 to 1984 and was involved in the organization of congresses and training courses worldwide. He had the strong vision that collections ideally should render the necessary underlying service for science, research and development. Thus, he clearly set the route for the DSM towards being a service organization in which the scientists should also be enabled to do their own research. He never forgot that good science needs good technical skills and that the so-called 'basic' techniques in the lab, which ascertain purity, viability and authenticity of a given strain, are indeed the basis on which good science depends. The WFCC awarded Honorary Membership to him in 1996 to thank him for the example he had been to all in terms of scientific development, business management and political wisdom.

From early on, he also understood that international cooperation is fundamental to strengthen science and technological development. He was one of the 'founding fathers and mothers' of ECCO - The European Culture Collections' Organization. One of the reasons to set up this organization was to offer a platform for transboundary exchange and discussion – even across the then existing 'iron curtain' which made scientific cooperation so difficult between the east and the west of Europe. The inaugural meeting was hosted 1982 by the DSM in Göttingen and together with Barbara Kirsop, UK, Yvanne Cerisier, F, Riet Schippers, NL, Milos Kocur, CZ and Enevold Falsen, S, Dieter Claus laid the foundations for this successful institution which today embraces over 65 member collections in over 26 countries.

In 1991 he received the Winogradsky Medal from the Society for General Microbiology of the former USSR in recognition of his outstanding services to microbiological science, culture collections development and international cooperation in the field.

He initiated the long been required ICECC-Information Centre for European Culture Collections in 1989, which he presided over after his retirement until 1993. He also had been one of the driving persons behind EU funded projects such as the Joint Catalogue of the DSM and the NCTC and the MINE Project, which triggered a series of other cooperation projects.

In the early days of the DSM/DSMZ he was not only the head of the collection but also built up and was responsible for the main service areas of patent and safe deposit, as well as the identification service, besides being curator for the AEFB. Early research interest focused on the degradation of toluene (laboratories in Rothampstead, England) and later was mainly in the aerobic endospore forming Bacillus and related genera, their taxonomy and systematics as well as the environmental impact which these organisms exert. Applied aspects of this group of organisms such as in the canning industry, in agriculture, hygiene, cosmetics or biotechnology triggered his interest and resulted in lectures and publications. He contributed to the "Approved lists of bacterial names" and was active in the official risk assessments for bacteria and subsequent allocation to risk groups in Germany. He was co-author to both of the paramount publications in the bacterial world: Bergey's Manual and The Prokaryotes in several issues. One of the alkalitolerant Bacillus species validly published in the 1990ties was named after him: Bacillus clausii – and it is certainly not pure chance that this species has been proven to be a benign organism which is being used in probiotic formulations. Being dedicated to the practical side of science his interests also spanned the areas of technical problems, management, organization, and day-to-day procedures in the collection laboratory which have been adopted by many of the younger collections in the world.

He supervised numerous Diploma and PhD students from Germany, Europe and all over the world and generously contributed to the enlargement of existing or building up of new collections in other places in the world.

Long after his retirement he continued to work in the laboratories of the Microbiological Institute of the University of Göttingen on biotechnological questions.

In 2008, he received Honorary Membership to the Association for General and Applied Microbiology (VAAM) in recognition for his responsible commitment over decades for building up of a microbial collection of national and international high reputation rendering authentic services to science and to honor his lifetime achievement.

Dieter has been known to us as a real humanistic and integrative personality. He was able to listen and never felt like competing with but rather gave support to others, especially young scientists. He was willing and loved to see them growing. He was the quiet, steady, reliable and dedicated worker in the background; a friend, a human being with a strong sense for scientific duties and missions, which he performed with an intrinsic ethical incorruptibility. He never liked to be in the centre of public interest though some of the conference pictures show him happily dancing with young Thai ceremonial dancers or with the former WFCC President Barbara Kirsop.

We lose a good friend, true mentor, and upright scientist, who always had also a clear position towards the social and political background that shapes the conditions for our scientific lives.

We will miss his open, warm and altruistic personality.

Should you wish to condole personally, please write to: