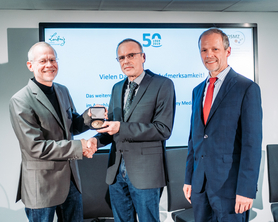 On the occasion of the 50th anniversary celebrations of the Leibniz Institute DSMZ-German Collection of Microorganisms and Cell Cultures GmbH, chemist Dr. Peter Schumann was awarded the internationally renowned Bergey Medal for his services to the knowledge of the diversity and systematics of bacteria (taxonomy). The attendant German Federal Minister of Research Anja Karliczek congratulated on this honour, which is awarded by the Bergey's Manual Trust. "Peter Schumann is one of the last two proven experts worldwide in the field of chemical analysis of bacterial cell walls," said Prof. Dr. Jörg Overmann, Scientific Director of the Leibniz Institute DSMZ, highlighting the importance of the prizewinner's scientific expertise.

Again a DSMZ scientist is awarded by the Bergey Trust
In his laudatory speech, the Vice President of the Trust, Prof. Dr. Dr. Peter Kämpfer of Justus-Liebig University in Giessen, emphasized: "There is no scientist I know who has cooperated with so many working groups worldwide.” As a result of these collaborations, Dr. Schumann has published 519 articles so far, which have been quoted more than 13,324 times by other scientists. Due to the outstanding achievements, the Bergey Trust unanimously decided to award the Bergey Medal 2019 to Dr. Peter Schumann. With the words "Peter, well deserved", the microbiologist concludes his laudation pointedly. Chemist Schumann is already the fourth DSMZ scientist to receive an award from the Bergey Trust. Previously, Dr. Hans Hippe (2003), Prof. Dr. Erko Stackebrandt (2009) and Prof. Dr. Hans Peter Klenk (2014) had already been honoured with a Bergey Medal and the Bergey Award, respectively.
"I am very happy about this award. I am proud to continue the series of DSMZ scientists who have received the Bergey Trust award in the past. Many will follow," says Peter Schumann. "It is clear to everyone that behind such achievements are not individual scientists, but working groups," Schumann acknowledged his DSMZ colleagues.

About the Leibniz Institute DSMZ
The Leibniz Institute DSMZ-German Collection of Microorganisms and Cell Cultures is the world's most diverse collection of biological resources (bacteria, archaea, protists, yeasts, fun-gi, bacteriophages, plant viruses, genomic bacterial DNA as well as human and animal cell lines). Microorganisms and cell cultures are collected, investigated and archived at the DSMZ. As an institution of the Leibniz Association, the DSMZ with its extensive scientific services and biological resources has been a global partner for research, science and industry since 1969. The DSMZ is the first registered collection in Europe (Regulation (EU) No. 511/2014) and certified according to the quality standard ISO 9001:2015. As a patent depository, it offers the only possibility in Germany to deposit biological material in accordance with the requirements of the Budapest Treaty. In addition to scientific services, research is the second pillar of the DSMZ. The institute, located on the Science Campus Braunschweig-Süd, accommodates more than 72,500 cultures and biomaterials and has 198 employees. www.dsmz.de

The Leibniz Association
The Leibniz Association connects 95 independent research institutions that range in focus from the natural, engineering and environmental sciences via economics, spatial and social sciences to the humanities. Leibniz Institutes address issues of social, economic and ecological relevance. They conduct knowledge-driven and applied basic research, maintain scientific infrastructure and provide research-based services. The Leibniz Association identifies focus areas for knowledge transfer to policy-makers, academia, business and the public. Leibniz institutions collaborate intensively with universities – in the form of “Leibniz ScienceCampi” (thematic partnerships between university and non-university research institutes), for example – as well as with industry and other partners at home and abroad. They are subject to an independent evaluation procedure that is unparalleled in its transparency. Due to the importance of the institutions for the country as a whole, they are funded jointly by the Federation and the Länder, employing some 19,100 individuals, including 9,900 researchers. The entire budget of all the institutes is approximately 1.9 billion Euros. www.leibniz-gemeinschaft.de